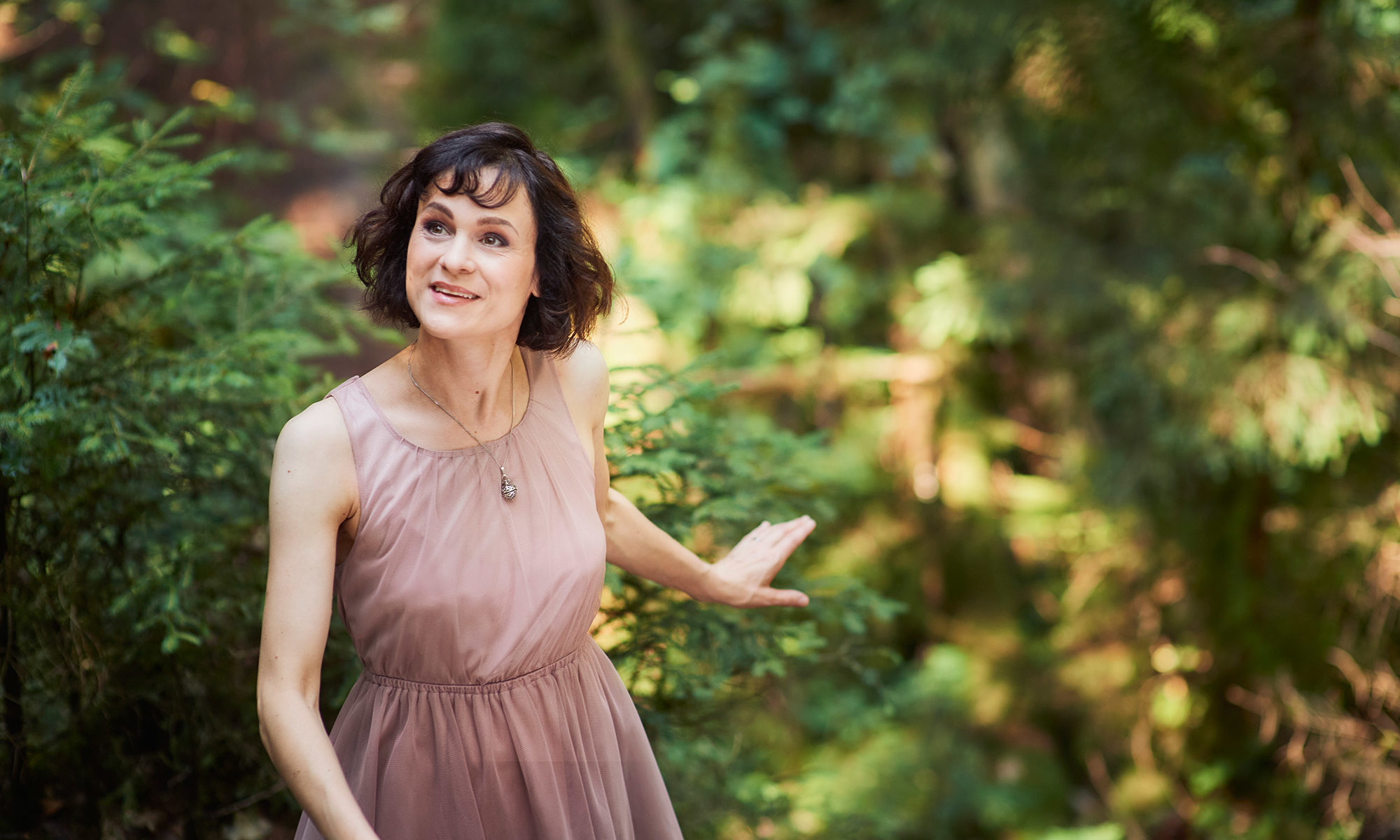 The Marian church was the perfect setting for this absolutely wonderful performance of “Salve Regina – Transfigured Love”. The brilliant soprano Katrin Küsswetter began this excellent concert with “Exsula Filia” from Monteverdi’s “Sacri Canti” (1628). Her brilliant voice and her jubilant tones in her upper register created a beautiful intensity which left a deep and lasting impression on her audience… Reger’s expressive compositions were also wonderfully performed by her.

“… the well-known soprano Katrin Küsswetter illustrated the demanding art that is sacred vocal music. In Mozart’s “Laudate Dominum” and Louis Spohr’s “Offertorium-Jubilate Deo,” passionate choral jubilation merged with Katrin Küsswetter’s clear, powerful soprano voice that filled the entire room. With far-reaching ambiance and her coloratura, which is full of lightness, the artist made the heavenly praises a fascinating experience. Through the artistic interaction of all protagonists, the cantata “How beautifully shines the morning star” by J. Kuhnau unfolded as a magnificent song of jubilation, in honor of Christ. The applause didn’t want to end – an absolute exception at performances of sacred music.”

“… The soprano Katrin Küsswetter delivered a dreamlike, but technically demanding concert programme, the realization of which required special artistic and interpretative qualities. With the purity of her colorful voice, Küsswetter, once again, sang her way into the hearts of her listeners. The bell-like clarity of the soprano merged harmoniously with Marius Popp’s organ playing, who lovingly embedded her wonderful voice in regal sounds. Together, they illustrated what wonderful experiences are to be had when words and sounds combine to create the most beautiful togetherness. In every single phrase she sings, the opera and concert singer from Nuremberg combines textual expression and beauty of sound, while appearing entirely at home in the cheerful world of singing. She not only inspires with her great voice, but also with her charm and her emotions, which never seem exaggerated.

Simply delightful
She performed the “Schwips-Lied” from the Strauss operetta “One Night in Venice” in a sparkling manner. She also displayed her acting skills, in which she skilfully flirted with the audience…. Her Adele from “Fledermaus” came across as bold and cocky. With her soft soprano, which is also aesthetically pure in the high notes, she caressed the ears of her listeners with Olympia’s aria “Les oiseaux dans la charmille” from “The Tales of Hoffmann”. This, along with Musetta’s aria from “La Boheme” she interpreted with admirable singing technique and musical power. It gets under your skin; this is great Puccini art. ..”

I thought I saw all the heavens open before me and God Himself.” (G.F. Handel): Katrin Küsswetter’s bright, agile soprano is bewitching in its expressive interpretation with virtuosic lightness and skilful baroque ornamentation. An outstanding soloist, her “Rejoice Aria” is truly marvelous…. Radiant, (yes in the literal sense), and wonderful in the vocal opening….In the midst of the euphoria, the spiritual enthusiasm of this Messiah was awakened in performers and listeners alike.”

“With an all-round successful, fabulous performance of G.F. Handel’s oratorio “Joshua,” the Philharmonic Choir of Herzogenaurach conducted by Ronald Scheuer delighted their audience . To put it simply, it was an evening of good, strong singing, radiantly sung. The “Joshua” performance is adequately cast with a masterful group of soloists. Katrin Küsswetter was enchanting as a voiceful and yet girlish Achsah (soprano), especially in her trilling bird voice idyll in a duet performance with violin and flute solo… Keep up the good work!”

“In the pilgrimage church of Sossau, the Assumption of the Virgin Mary was celebrated with a top-class concert in every respect…. In Mozart’s “Regina coeli” (KV 108) the audience could sense the jubilation that Mozart worked so brilliantly into this song of praise for the Queen of Heaven.
Katrin Coloratura, especially in Mozart, should not be confused with mere vocal acrobatics. Katrin Küsswetter, whose soprano voice is pure across her entire vocal range, lent her performance the subtle warmth that made this “Regina coeli” so expressive. K. Küsswetter exhibited great versatility of vocal expression in three arias by G. Giordani … A. Müller’s interpretation let the (forgotten) “Lytaniae Lauretanae” by the Benedictine Father Bonifaz Stöckl shine in full baroque splendor. Great sonoric unity of the vocal soloists in “Regina angelorum”. All musicians brought such joy to the audience of the packed pilgrimage church.

“The formation Rabo den Nube with Nathalie Haas and Katrin Küsswetter, (vocals) Petra Meier (accordion and dulcimer) and Michael Tschöpe (guitar and banjo) made their debut at this year’s open-air picnic in the garden of the humid Zeidler Castle. With songs on the theme of war and peace, misery and persecution… the artists captivated the audience. In the well-known Handel aria, “Lascia ch’io pianga”, Küsswetter’s soprano shone against the gentle backdrop on dulcimer and guitar… To enthusiastic applause, the group took leave of its audience with the popular classic “Imagine” by John Lennon.”

“An extraordinary setting of the Passion of Jesus, the St. John Passion by G.A. Homilius, was performed on Good Friday in the Margrave Church in Seibelsdorf. A glamorous highlight of church music, it was a moving concert that demonstrated how impressive, lively and touching the written word can become, through the power of music. Katrin Küsswetter (soprano) and Katarina Andersson (mezzo-soprano), who appeared with great presence, both proved to be excellent choices. With their bell-like voices, they evoked a broad range of emotions, beautifully and with great style, through radiant, multifaceted tones.”

“Whether lyrical, or pure coloratura, velvety depth or great height, the singer embodies what Mozart affectionately referred to as a remarkably agile voice. In Italian and German, Küsswetter presented the aria text with impeccable enunciation. The recitative and the aria “Bella mia fiamma, addio!/ Resta, o cara” (KV 528) were particularly impressive. The aria “Vorrei spiegarvi, o Dio!” (KV 418) was also deeply touching… Katrin Küsswetter sang effortlessly, as if it were the easiest thing in the world. She mastered all difficulties. With lyrical expertise she produced such pleasing tones that seemed to come straight from the heart, only to devote herself to the second part of the respective aria with insane tempi and very large intervals..”

“A top-class ensemble led by Katrin Küsswetter performed arias by Handel, Telemann and Piatti in an airy and light manner. …All with the highest musical quality and passion”

“Katrin Küsswetter has a wonderfully warm soprano, her voice unfolds a wealth of brilliance and power of projection, especially in the upper range…She enacts her roles in the two Rutter works soulfully, and in a rich, nuanced way… At the end, there were standing ovations.”

“Rusalka’s aria… was performed in the original Czech language so intimately that it was hard for the audience to hold back the tears. The absolute high point was the aria of the puppet Olympia… an all-round exhilarating evening!”

The three well-disposed soloists also deserve special mention: Katrin Küsswetter shines with a truly fiery, sonorous soprano solo… The girlishness of her secure, pleasant voice, which she illustrated in a concert of early baroque music a mere fortnight ago, transforms when she sings Mendelssohn, into a masterful, romantic fullness….an inspiring performance with a message!”

The baroque composer, Henry Purcell, known as “Orpheus Britannicus”, is the source of the motto for this concert, with his well-known aria entitled “Music for a while”. Katrin Küsswetter enchants with her girlish and flexible, warm timbre and the broad register of her colorful soprano voice, together with her charming stage presence and intelligent, entertaining stagecraft.

Fairytale-like, the duo brought mermaids, fairies, elves, dolls and wizards to life, and transported the audience into romantic reverie, longing, pain and passion… In the moonlight, she created a picture of loving, painful longing.

Her masterpiece was undoubtedly her multifaceted interpretation of “Aria of the Olympia” from Offenbach’s “Les Contes d ́Hoffmann” which was delightfully sung and played. Then, with a wealth of empathy, dramaturgical expertise and superb differentiation, the soprano took her audience on the gruesome ride of F. Schubert’s setting of H. Heine’s ballad “Der Erlkönig”, inspiring and fascinating them.
K. Küsswetter shone as a powerful, lyrical coloratura soprano…. With her pristine articulation and extensive tessitura, she performed the character of the pieces very skillfully, exhibiting technical mastery and a rare sensitivity of  interpretation: With warm timbre, especially in quieter, softer passages…She performed with unquestionable virtuosity, especially in dizzyingly high scalic passages.”

“What could be “sweeter than roses”?…. In the opera “Giulio Cesare” by Händel, Küsswetter showed that flowing coloraturas are a unique strength of hers. She performed the aria “Da tempeste il legno infrante” with distinct dynamics. The lyrical songs of  Beethoven and Mozart were very sensitive, to which she lent some tongue-in-cheek charm. Konstanze’s aria from Mozart’s “Abduction” was a triumphant example of Küsswetter’s opera roles for which she is renowned….
Intimate and loving, but also gracefully moved, the soprano expressed passion, longing and French melancholy in the art songs of Fauré and his contemporaries. Musetta’s delicate aria  from “La Bohème” drew the audience to great applause. The grand finale of the evening was the encore, a joyful rendition of Giordani’s “Caro mio ben”

“Performed to an 800-strong audience, Haydn’s Creation was truly the crowning glory of this year’s concert series at the Collegiate Church, which was filled to capacity….Soprano Katrin Küsswetter’s jubilant heights, the airy light coloraturas and the interspersed improvised ornamentations were particularly inspiring“.

“These love songs…  captivated everyone immediately with their urgency. It’s remarkable how Küsswetter implemented the tension… The simple melodies of Dowland were enchanting. Through the soprano’s interpretation, they become graceful, delicate and thus all the more authentic, with just the right hint of pathos at the end. This is musical delight at its  most precious, like golden morning light! Even after the interlude, the program left no wishes unfulfilled. The duo continued to illustrate the wealth of their versatility. Reminiscent of Paris in the springtime, their performance of Faure’s art songs were an inimitable treat.

“The air vibrates, the earth sways, surely the roof is about to blow off as all performers stand together, the Lehrbuben (apprentices) in front, and strike up the “Wake up” choir with such pathos… Anyone who has sung in Bayreuth is prepared for all situations in life,” it said in the arts section of this newspaper.”

This year’s Children’s Opera Bayreuth has experienced a historic moment….. standing ovations for the “Meistersinger.”

Unanimous cheers for everyone. Sold out in no time at all, this Meistersinger is  the most coveted young talent event right now. The staging remains firmly in a genre in which the music and the singers play first fiddle to everything else….In doing so, it attains its goal of delivering a coherent arc of suspense without being overwhelming … Sung in a highly-professional manner.